Election 2022 Results: The assembly elections in Uttar Pradesh were held in seven phases.

The BJP has wonfour states, including the politically significant Uttar Pradesh, in the mega elections seen as the semi-final before the 2024 national election. The Aam Aadmi Party (AAP) has also hit gold in Punjab, giving the eight-year-old outfit its second state after Delhi. In Uttarakhand, the BJP has crossed majority mark while its ahead in 19 of 40 seats in Goa.

With around 90 of the state’s 117 seats, AAP is heading for a sweep in Punjab. “The people Punjab have done something spectacular. This has been a huge revolution. So many huge leaders have lost… Amarinder Singh has lost, Sukhbir Badal lost, Parkash Singh Badal lost, Charanjit Channi lost, Navjot Sidhu lost, Bikram Singh Majithia lost… this is nothing short of a massive, massive revolution,” Arvind Kejriwal said.

In Uttar Pradesh, the BJP has crossed the 270 mark in latest trends. The party is firmly ahead of Samajwadi Party and Yogi Adityanath set for a second consecutive term as Chief Minister. The majority mark in the 403-member legislative assembly is 202.

The BJP has won 20 seats in Goa while the Congress has won nine seats and is leading on 2 seats. Maharashtrawadi Gomantak and AAP won 2 each, Goa Forward Party and Revolutionary Goans Party win 1 each and Independent 3

The BJP is likely to emerge as the largest party in Manipur but is short of the majority mark, show election trends. Meanwhile, BJP’s Chief Minister N Biren Singh has won from the Heingang seat by around 18,000 votes.

Here are the Live Updates on Election Results 2022:

Get NDTV UpdatesTurn on notifications to receive alerts as this story develops. 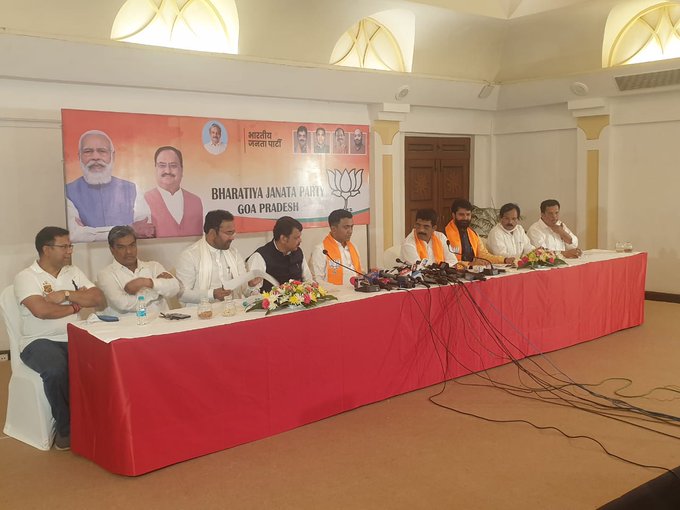 3 of the 5 chief ministers contesting elections won their seats, 2 lost – Punjab’s Charanjit Singh Channi lost both seats he was fighting from 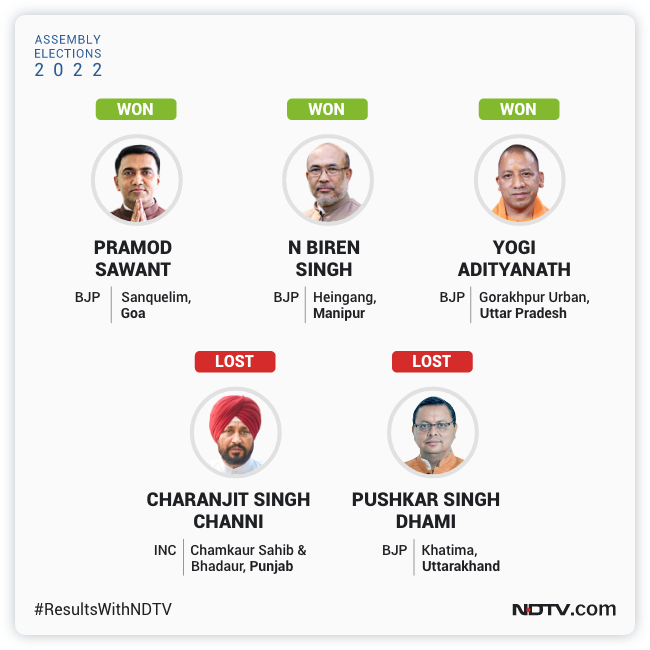 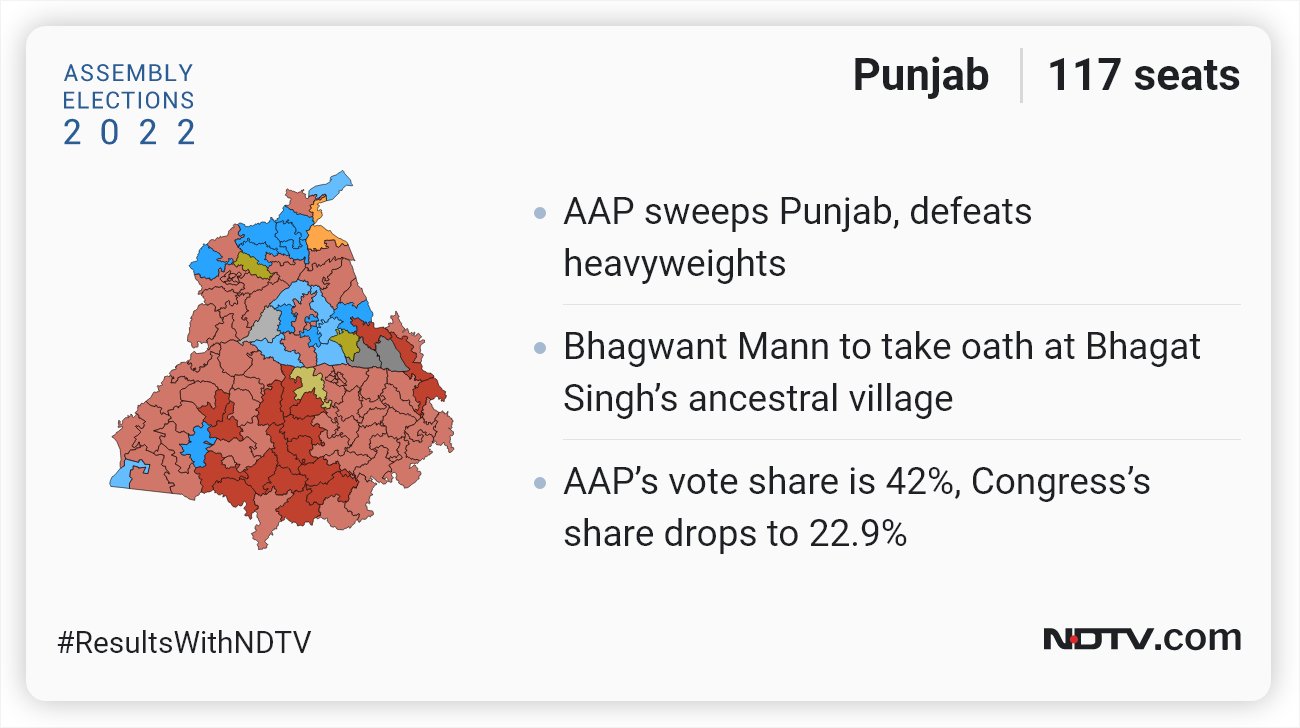 The BJP is looking at a 260-plus tally in 403-seat Uttar Pradesh, with the Samajwadi Party, its main challenger, a distant second, election results show. The party is ahead in 266 seats while the SP is likely to win in 132 seats. 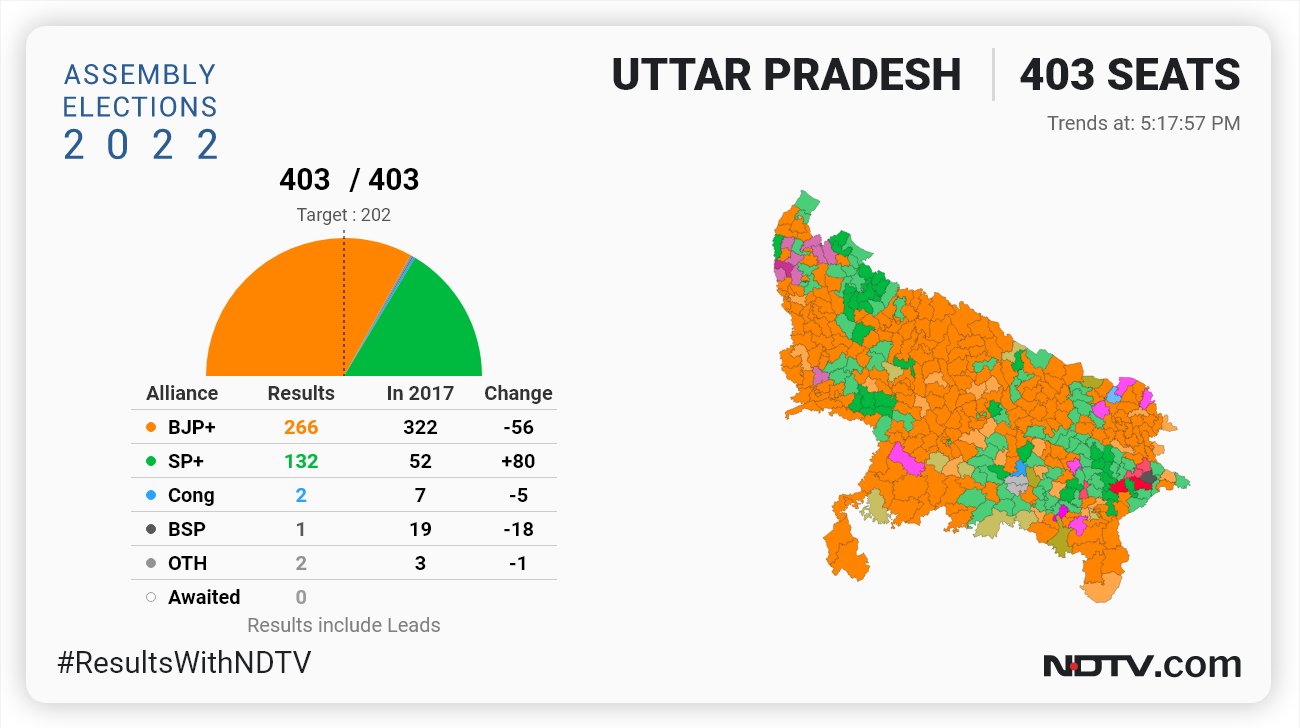 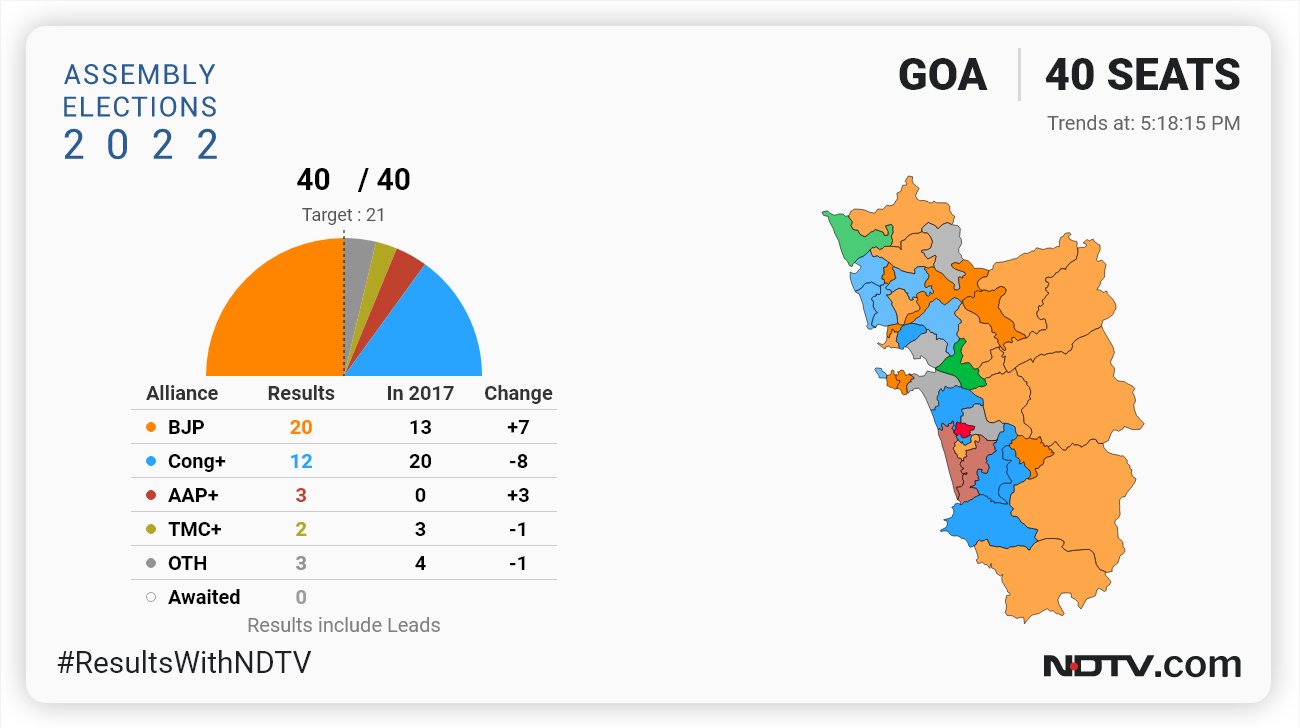 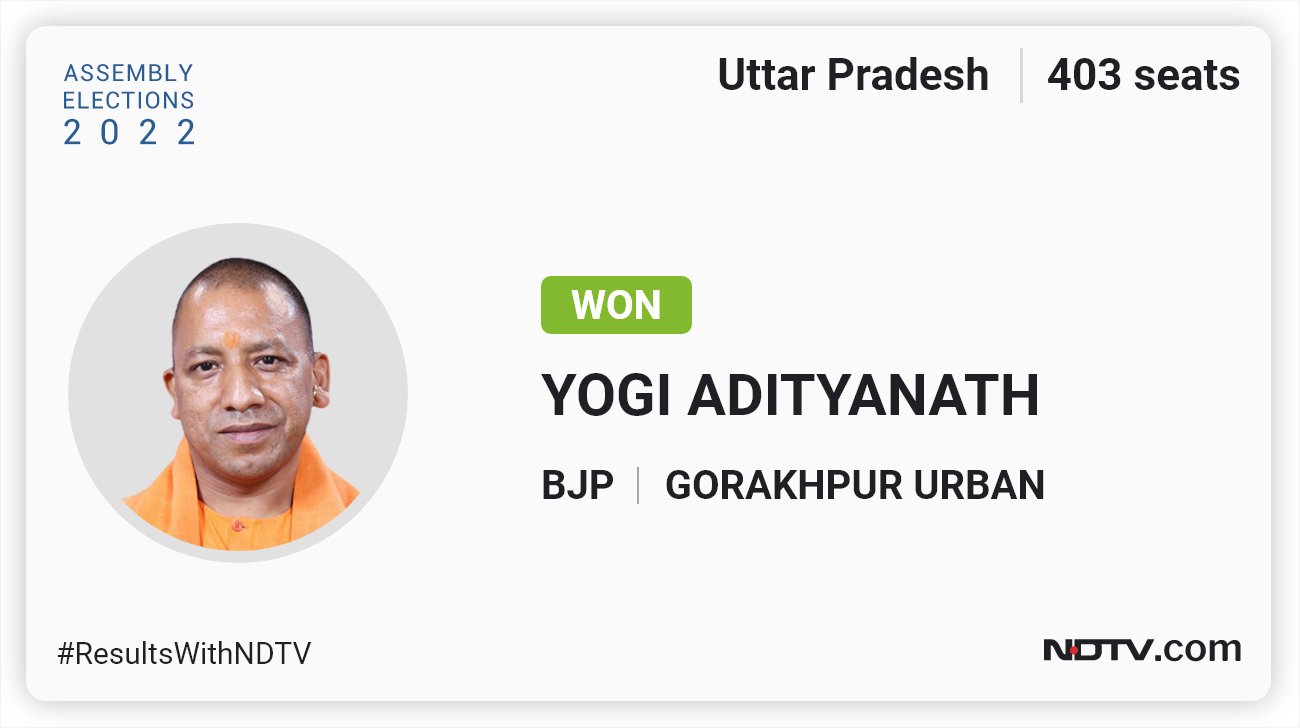 “Hindu-Muslim-Sikh-Isai Sabke Sab Hein Bhaajpayee.” This is an answer to all those who divided (the state) on the basis of appeasement politics, caste. We are forming govt with ‘Jai Shree Ram’ on March 10…; can’t get a better government than this: BJP leader Aparna Yadav pic.twitter.com/dxm0tWNZfL

All from the Badal clan, who contested the 2022 state Vidhan Sabha elections, have lost the polls from their respective strongholds. And there wouldn’t be anyone from the Badal family in the newly elected state assembly.

The last time it happened was during the 1992 elections when Shiromani Akali Dal (SAD) boycotted the state assembly elections.

It shows the popularity of PM Modi across the country. It’s the result of PM Modi &CM Yogi’s social welfare schemes which were implemented honestly. Bulldozer of development will continue to work in UP. We’re getting more seats in Goa & Manipur than before: Union Min Piyush Goyal pic.twitter.com/fRL9N0B8MG

Humbly accept the people’s verdict. Best wishes to those who have won the mandate.

My gratitude to all Congress workers and volunteers for their hard work and dedication.

We will learn from this and keep working for the interests of the people of India.

Election Results: BJP builds on vote share in Uttar Pradesh
The BJP has shored up 44.6 per cent of the vote, data at 2 pm showed – a significant 5 per cent improvement over the 2017 elections.

I humbly accept the verdict of the people of Punjab and Congratulate @AamAadmiParty and their elected CM @BhagwantMann Ji for the victory. I hope they will deliver on the expections of people. 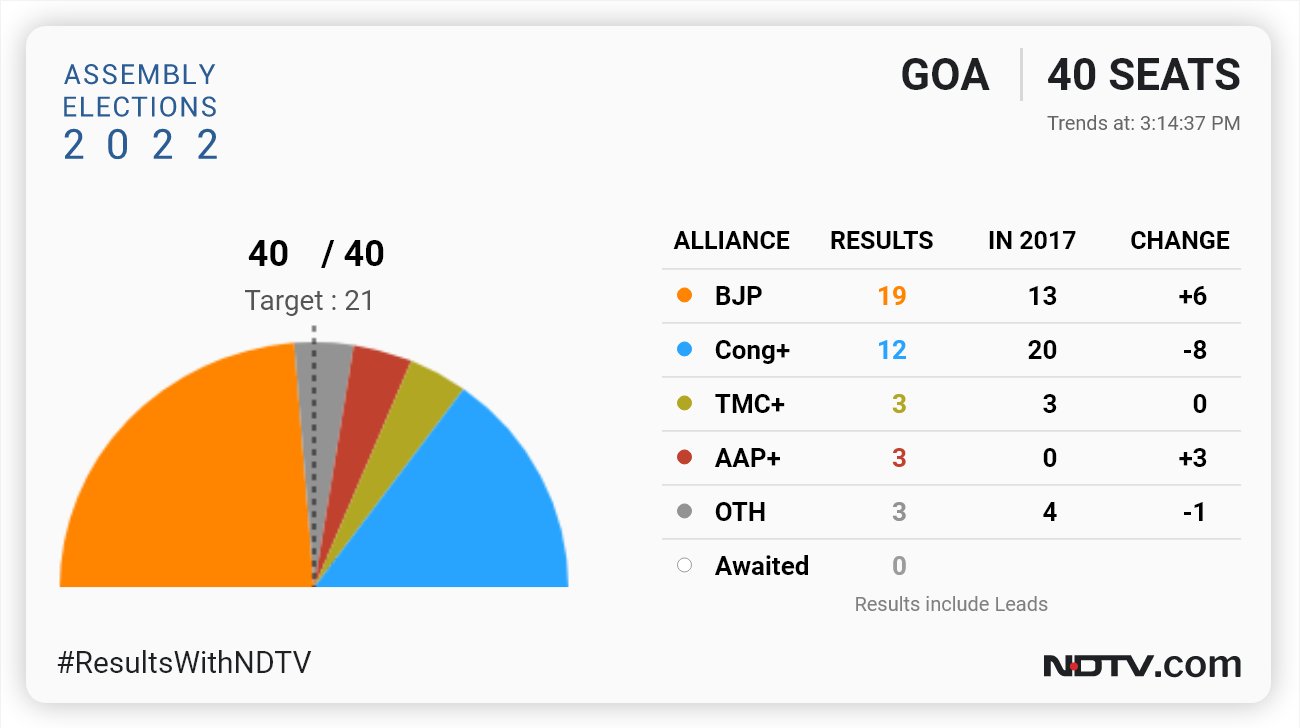 The results today is a revolution in Punjab. We all love you Punjab.

We will build an India where children won’t have to go to Ukraine to study, people will come to India for education.

Revolution first came in Delhi, then in Punjab. Now, the entire country will witness this revolution. 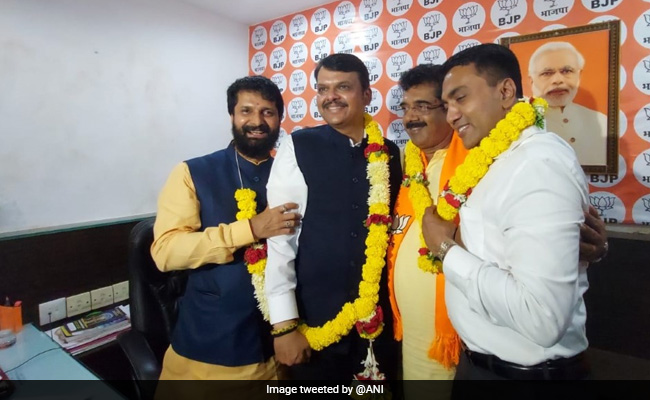 Election Results: BJP ahead in 263 seats, Samajwadi Party distant second in UP

In Uttar Pradesh, the BJP seems to have successfully tackled the anti-incumbency and is appeared to win nearly 300 seats. The party is leading in 263 seats while the Samajwadi Party is ahead in 135 seats. 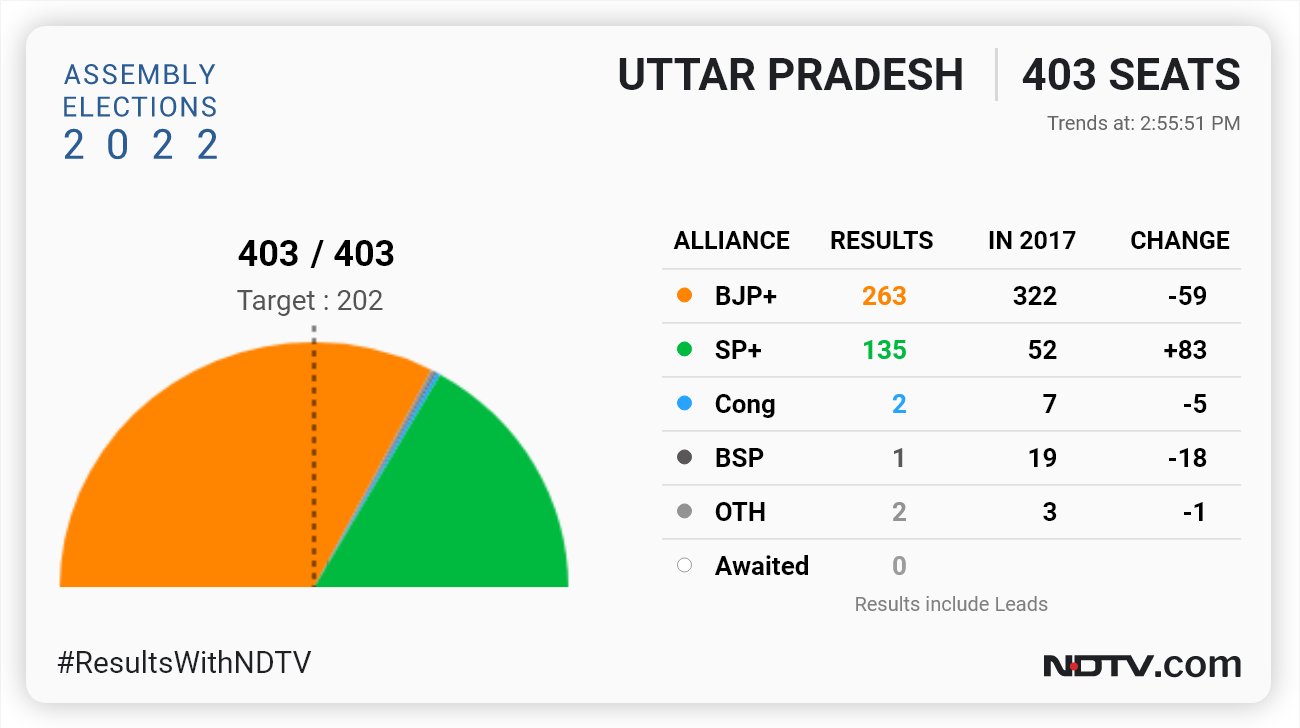 We accept this mandate with all humility. We commit ourselves to work harder to earn the trust and love of every Goenkar. No matter how long it takes, we will be here and we will continue to serve the people of Goa. 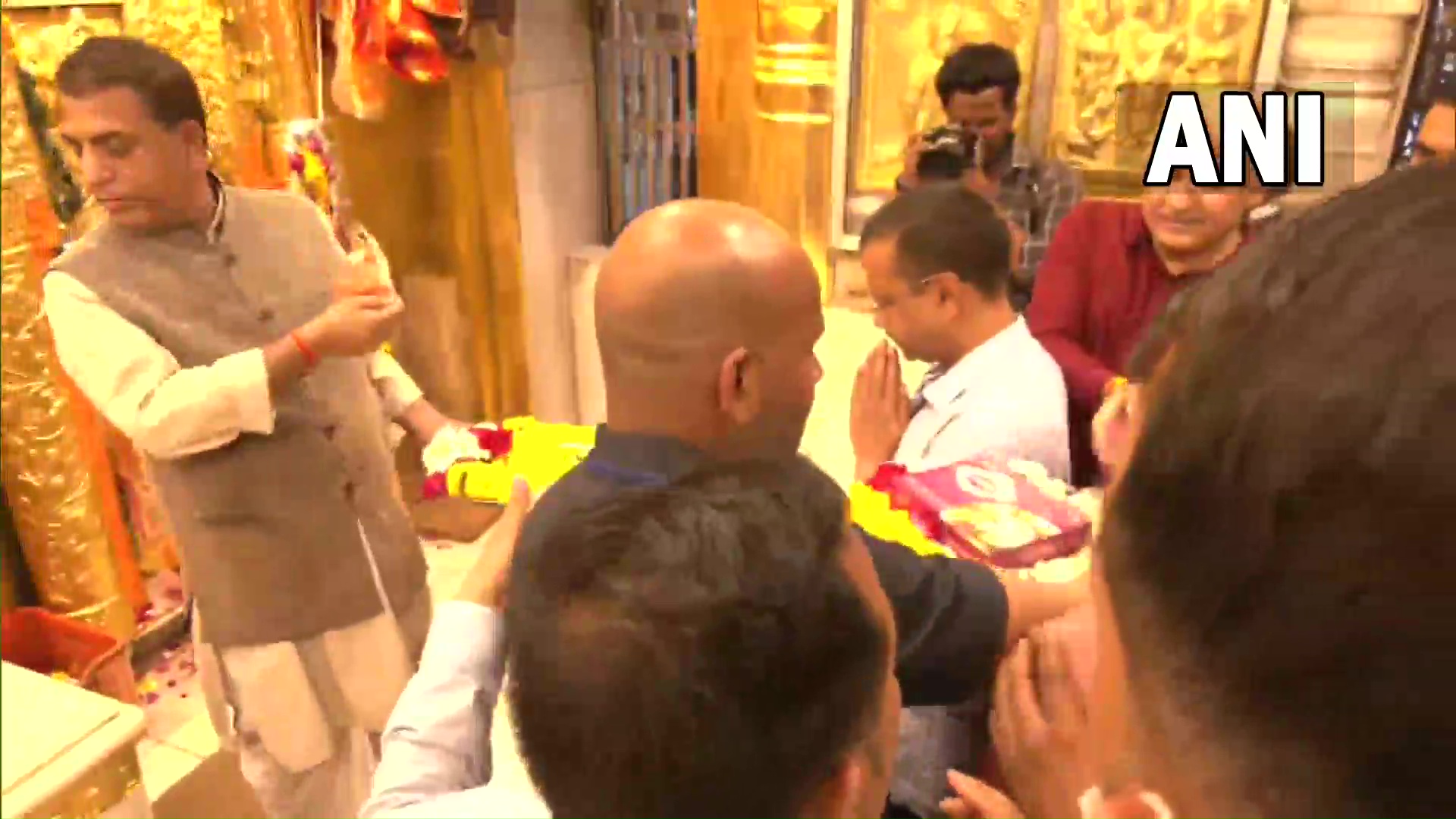 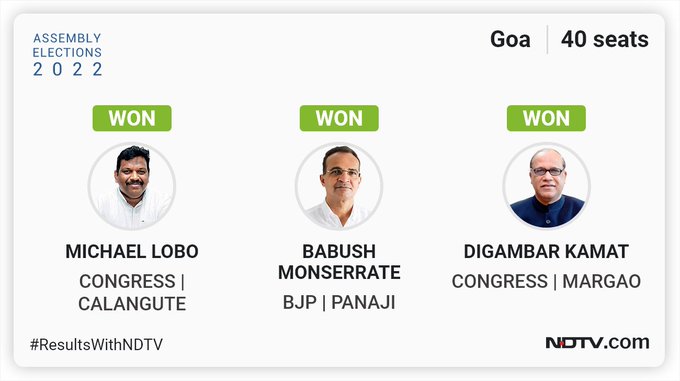 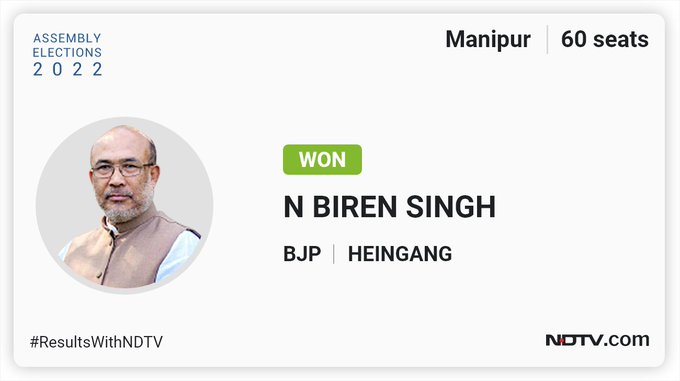 The BJP has claimed the support of three Independents in Goa. The party said that it will meet the Governor later in the day to take stake of the government.

Election Results: Harish Rawat trailing by over 16000 votes in Uttarakhand

Former Uttarakhand Chief Minister Harish Rawat is now trailing by over 16,000 votes in the Lal Kuan constituency. The last round of counting is left in the constituency. 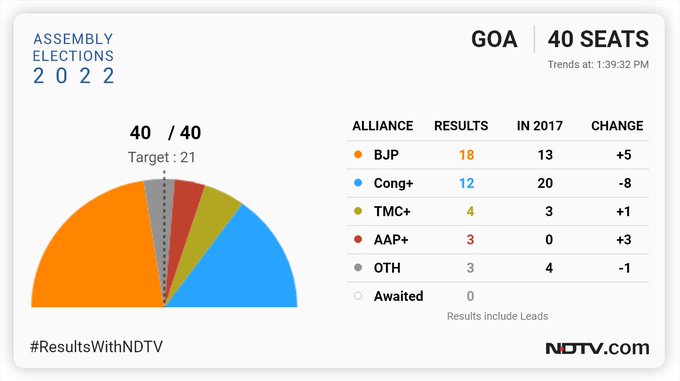 BJP will form the government in Goa; we will take MGP and independent candidates with us, says Goa CM and BJP leader Pramod Sawant

After Punjab, These Two States Are Next AAP Ventures, Says Party Leader
Arvind Kejriwal’s Aam Aadmi Party, savouring its huge victory in Punjab, has its campaigns already in the works for the states of Gujarat and Punjab, party leader Akshay Marathe told NDTV on Thursday. Read here
Don’t Pay Attention To TV Trends, Akhilesh Yadav’s Party Appeals To Cadre
Akhilesh Yadav-led Samajwadi Party is not ready to give in yet, despite numbers loaded in favour of the BJP in Uttar Pradesh. The party has asked its workers to not be taken in by the trends and stay firm as it will form the government.

“It is an appeal to all Samajwadis and the workers of allies that do not worry about the trends being shown on TV, stay firm at your respective booths. In the end, democracy will win and the results will be in favor of the SP alliance,” tweeted the Samajwadi Party. Read here 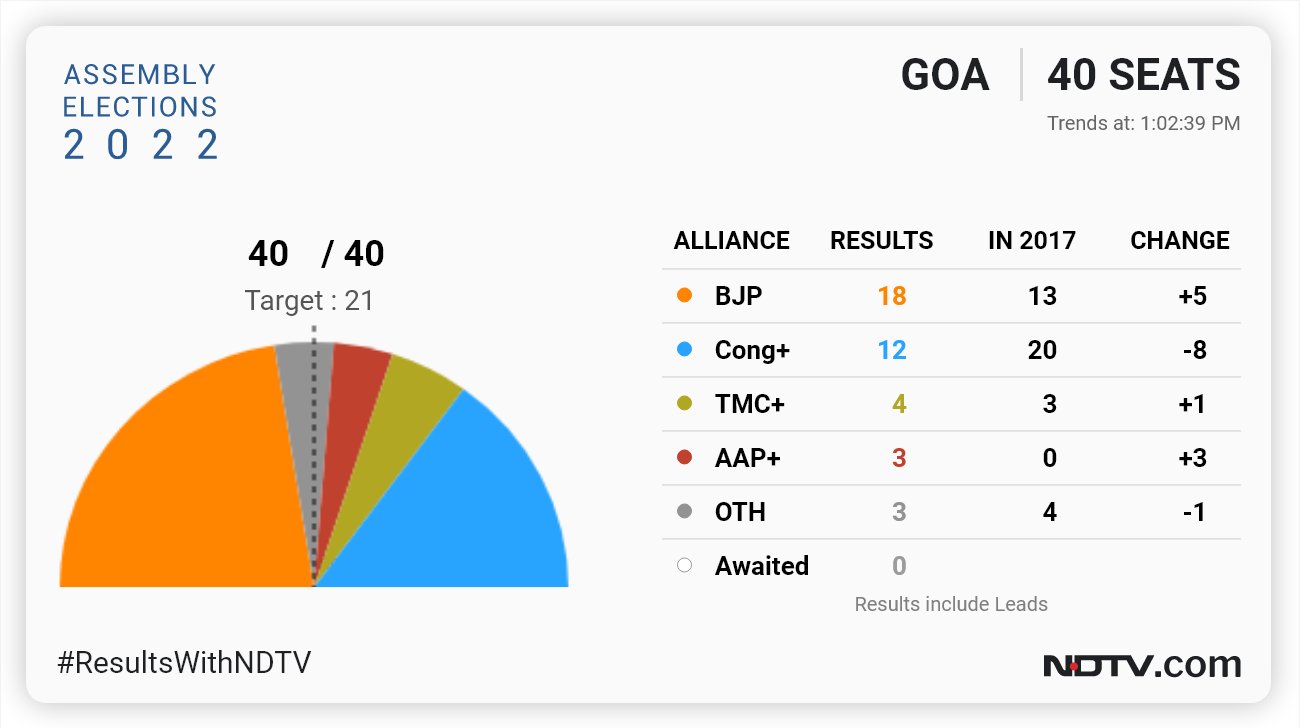 In Uttar Pradesh, the BJP seems to have successfully tackled the anti-incumbency and is appeared to win nearly 300 seats. The party is leading in 266 seats while the Samajwadi Party is ahead in 128 seats. 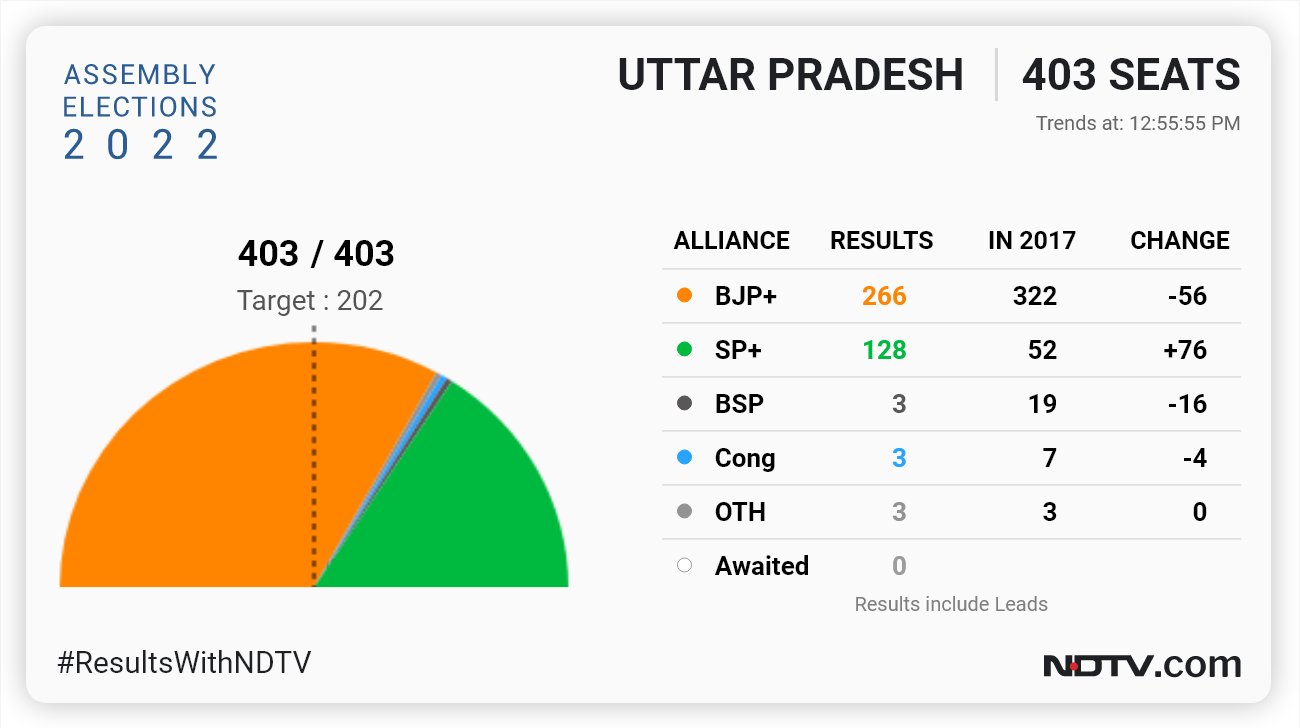 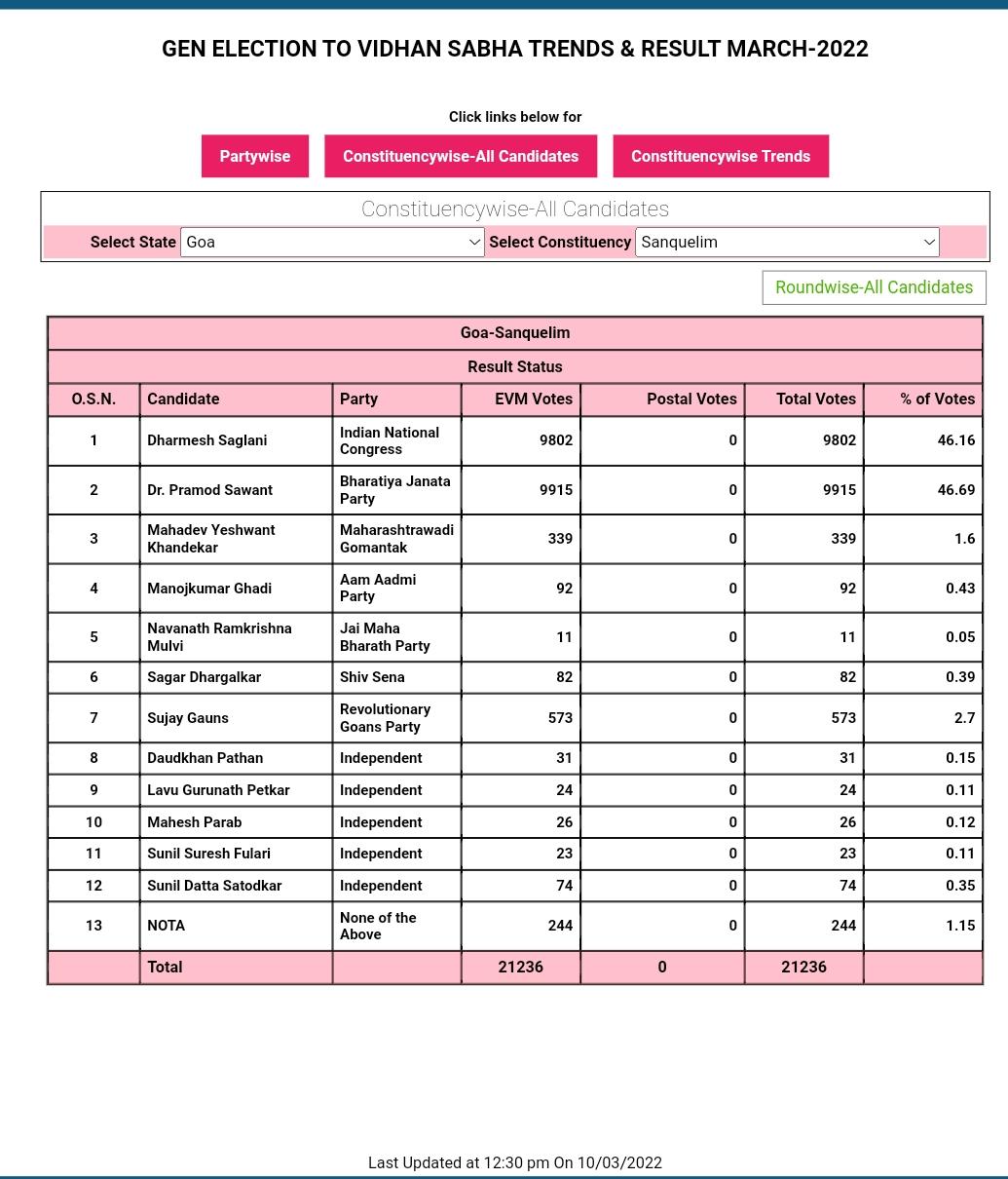 The BJP was leading in 19Assembly seats of Goa, while the Congress was ahead in 11, as per the latest trends available of 40out of the 40 seats in the state.Chief Minister Pramod Sawant is leading by over 448 votes so far in Sanquelim Assembly seat. 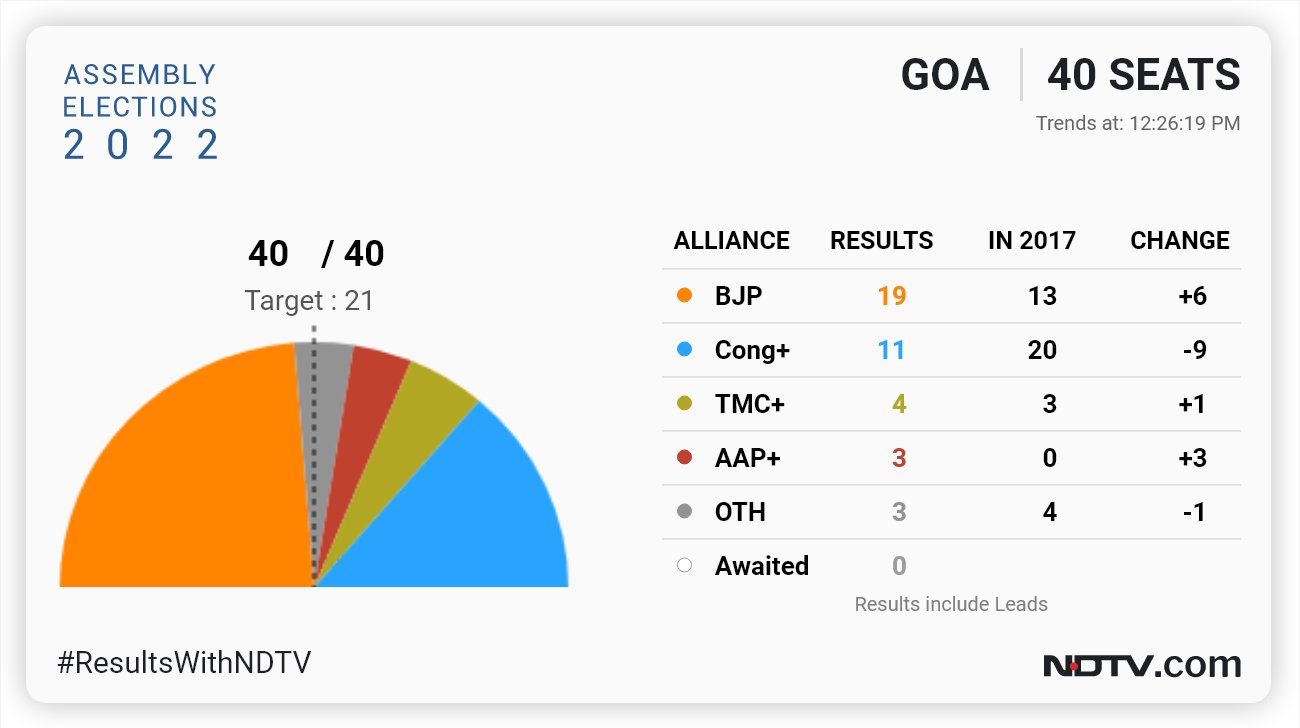 As election trends showed a BJP win in UP, the Samajwadi Party has asked its workers not to believe TV channels.

“It is an appeal to all the socialists and the workers of allies that irrespective of the trends being shown on TV, they are requested to stay put at their respective booths. In the end, democracy will win and the results will be in favor of the SP alliance,” the party tweeted.