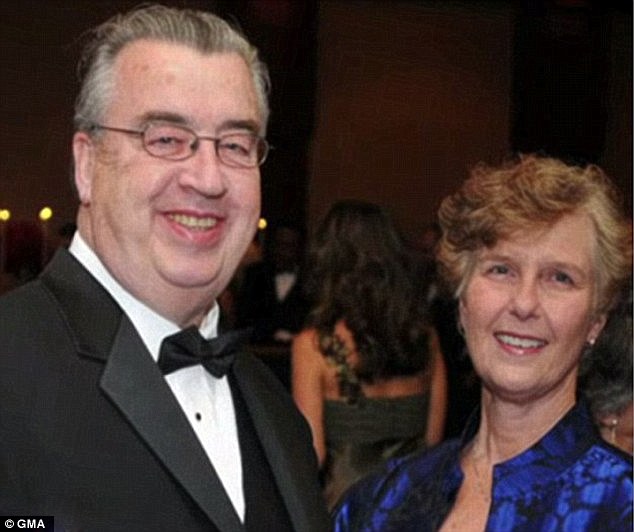 John Sheridan Killed His Wife, Himself

Somerset County prosecutors have released their report on the deaths of Cooper University Hospital CEO John Sheridan, 72, and his wife Joyce, 69 a retired history teacher. Both were found with fatal stab wounds in their burning Skillman home on September 28.

The mystery began when a neighbor saw smoke coming from the Sheridans’ home and called 911. Firefighters entered the smoky house and extinguished the blaze, which was confined to the master bedroom. There they found John lying on his back, at the foot of the bed, with the top piece of a two-piece armoire resting on his body. Joyce was found to the left of the bed. Also in the bedroom was a half-empty can of gasoline, which had been poured around the bed on the floor. The gas can was later found to have John’s DNA on it. A box of matches was discovered next to John’s body.

On the bed was a large carving knife with blood on it that was later found to be a DNA match for Joyce Sheridan. A serrated kitchen knife was also found in the bedroom, but no blood was found on it. Both knives came from the Sheridans’ kitchen set.

An autopsy by the Northern Regional Medical Examiner Office found that Joyce had suffered eight wounds to the head and a stab to the chest that perforated her aorta. She also had three injuries to her hands consistent with defensive wounds, the examiner said. The autopsy revealed Joyce was dead before the fire started.

John had five wounds to his torso and neck, all superficial, which the examiner said was consistent with self-infliction. According to the report, one of the wounds perforated the right jugular vein, causing bleeding which would have been fatal without treatment. Investigators found no defensive wounds on John. They also found soot in his larynx and carbon monoxide in his blood, which indicated that he was alive after the fire began.

The Sheridans’ bedroom also had six folds of cash totaling $950, a wristwatch, a cell phone, an iPad, and a large amount of expensive jewelry, all undisturbed. Expensive computers, electronics, and antiques throughout the home were also left in place, and investigators found no sign that there was an intruder in the home.

The Sheridan family disputes the findings of the report. A second autopsy performed October 4, by Dr. Michael Baden, a former medical examiner who was hired by the Sheridan family, concluded that neither of the two knives found at the scene could have caused the wounds to either John or Joyce. After the second autopsy, detectives returned to the scene to look for another weapon and found a piece of metal on the floor of the bedroom that had been melted, resolidified, and embedded in the hardwood floor. Investigators analyzed the piece of metal but could not determine what it had been.

Police interviewed 180 potential witnesses and established that the couple’s four sons were elsewhere when the crime was committed.

Family members and colleagues told police John had been acting “out of character,” “very upset,” and “withdrawn” prior to his death. Co-workers told police he appeared to be preoccupied and “disproportionately concerned” with a meeting that had been scheduled for Sunday, September 28.

Cooper University Health Care spokeswoman Lori Shaffer told reporters the meeting was to discuss the release of a state report that was critical of the hospital’s care of cardiac patients, noting the hospital had the highest mortality rate for coronary artery bypass graft surgery of all the state’s hospitals.

Shaffer, as well as Sheridan’s son Mark, have both denied that the content of the report, critical though it was, could have caused John to commit murder and suicide.