What is Rick Harrison’s net worth?

Richard Kevin Harrison was born in Lexington, North Carolina on March 22, 1965, to Richard Benjamin Harrison Jr. and Joanne Harrison. Richard is the third child. He had an older sister Sherry who died when she was six and has an older brother Joseph and a younger brother Chris. His father is a veteran of the U.S. Navy. When Harrison was two years old, his father was transferred to San Diego and the family relocated. Harrison had epileptic seizures starting at age eight. As this often confined him to bed, it led to a lifelong love of reading for Harrison. Harrison attended Taft Middle School in San Diego but dropped out during his sophomore year to pursue his “$2,000-a-week business of selling fake Gucci bags.” The Harrison family moved to Las Vegas, Nevada, in April 1981.

Once the family settled in Las Vegas, Harrison’s father opened his first secondhand store in 1981. The original Gold & Silver Coin Shop was a 300-square foot hole in the wall on Las Vegas Boulevard. Harrison worked in his father’s store during the daytime. At night, he repossessed cars. In 1986, the store moved to a larger space in downtown Las Vegas. Unfortunately, in 1988, the Harrisons lost their lease on that space. They then moved the store to a new commercial building on Las Vegas Boulevard. Harrison and his father had talked for years about converting the coin shop into a pawnshop. To them, it felt like the natural evolution of their business. That wasn’t that easy to do however, due to a Las Vegas law dating back to 1955 that required the issuing of new licenses for pawn shops to be limited based on the city’s population. By 1988, Las Vegas had a population of over 640,000 in the greater metro area. Harrison called the city’s statistician every week so that they could apply for one of the city’s rare and coveted pawn licenses as soon as the population of Las Vegas hit the next benchmark that opened up those licenses. That happened the following year in 1989 and the Harrisons were granted their pawn license. The same year Harrison and his dad opened the Gold & Silver Pawn Shop not far from the Las Vegas Strip.

Harrison and his dad were loaning out roughly $3 million each year by 2005. This made the Harrisons about $700,000 in income from the interest on the loans. By 2006, the pawnshop became well known for selling unique sports memorabilia. It was also a haven for gamblers who find themselves in need of pawning something to buy gas to drive back to wherever they came from.

Harrison spent four years pitching the idea of a television show about his pawnshop after his store was the subject of a 2001 PBS documentary and on the popular Comedy Central show Insomniac with Dave Attell in 2003. The idea kicked around HBO and YouTube before the History Channel came calling and developed the concept into the Pawn Stars that we know today as the highest-rated show on the History Channel. Pawn Stars debuted in July 2009 and as of June 2020, has run for 17 seasons and 577 episodes. Pawn Stars is by far the number one most popular show on The History Channel. The show is so popular that History renews the series in batches of 80 episodes, which is highly unusual for any television show, let alone a reality series.

Today Rick’s son Corey Harrison also works in the store and is seen on the show along with childhood best friend Austin “Chumlee” Russell. Rick’s nickname on the show is “The Spotter” because of his keen eye for undervalued items. 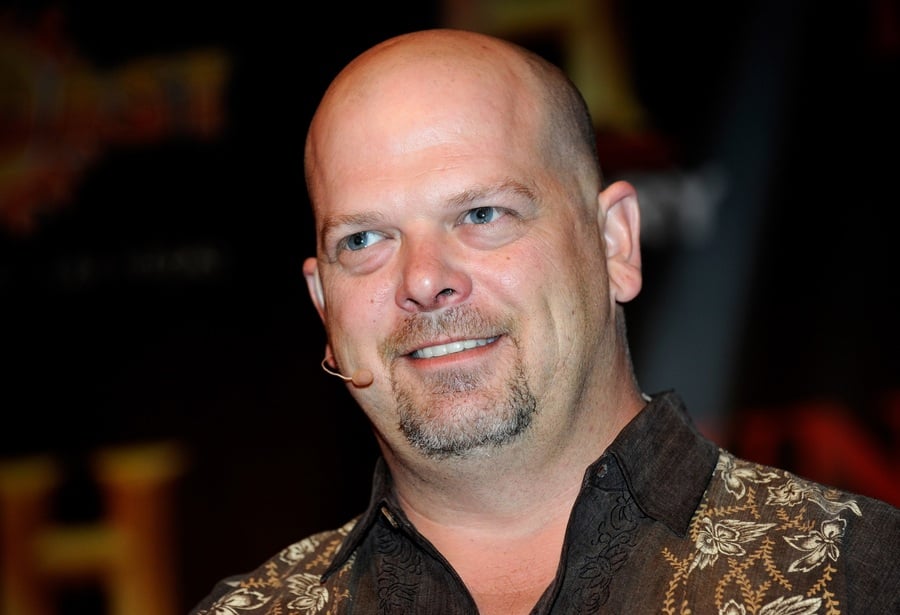 When Harrison was 17, his girlfriend Kim got pregnant. Despite a miscarriage, the couple decided to marry. Their first child, Corey, was born on April 27, 1983. Two years later, their second child, Adam, was born. Soon after Adam’s birth, Harrison and Kim separated.

Nine months later Harrison met the woman who would become his second wife, Tracy, on a blind double date. After dating for six months they moved in together, and eight months after this they married and assumed the responsibility of raising Corey and Adam. They later divorced.

In 2012, Harrison, twice divorced, announced his engagement to Deanna Burditt, who was also twice divorced. The couple married on July 21, 2013, in Laguna Beach, California.

In 2019, Harrison listed his Red Rock Country Club house in Summerlin in Las Vegas for $3.99 million. The 8,845-square-foot home was built in 2001. He bought the house in 2016 and spent about $600,000 on renovations. The flooring in the formal sitting room is made of granite that is acid-washed, cut into planks, and laid like a hardwood floor at a cost of $45,000. The home has two bedrooms on the lower level and two on the upper level. The home also has a gym also can be used as a bedroom. The home has seven baths, a12-seat home theater with a 150-inch screen and a curtain. A wine cellar holds more than 1,000 bottles. The home has an elevator and a central sound system where someone with a phone can play music in any room.

The front of the house overlooks Red Rock Canyon’s Spring Mountains and in the backyard has views of the Strip and overlooks the Arroyo Golf Club. The game room upstairs has a balcony at the back of the home. The backyard has a lagoon-style pool and elevated spa, and a gate that leads to the golf course. There is a 10-foot waterfall as well as a lazy river that leads into the pool. The backyard also has an outdoor kitchen. Harrison chose the neighborhood because their kids went to high school in the area but since the kids are grown they no longer need the space.