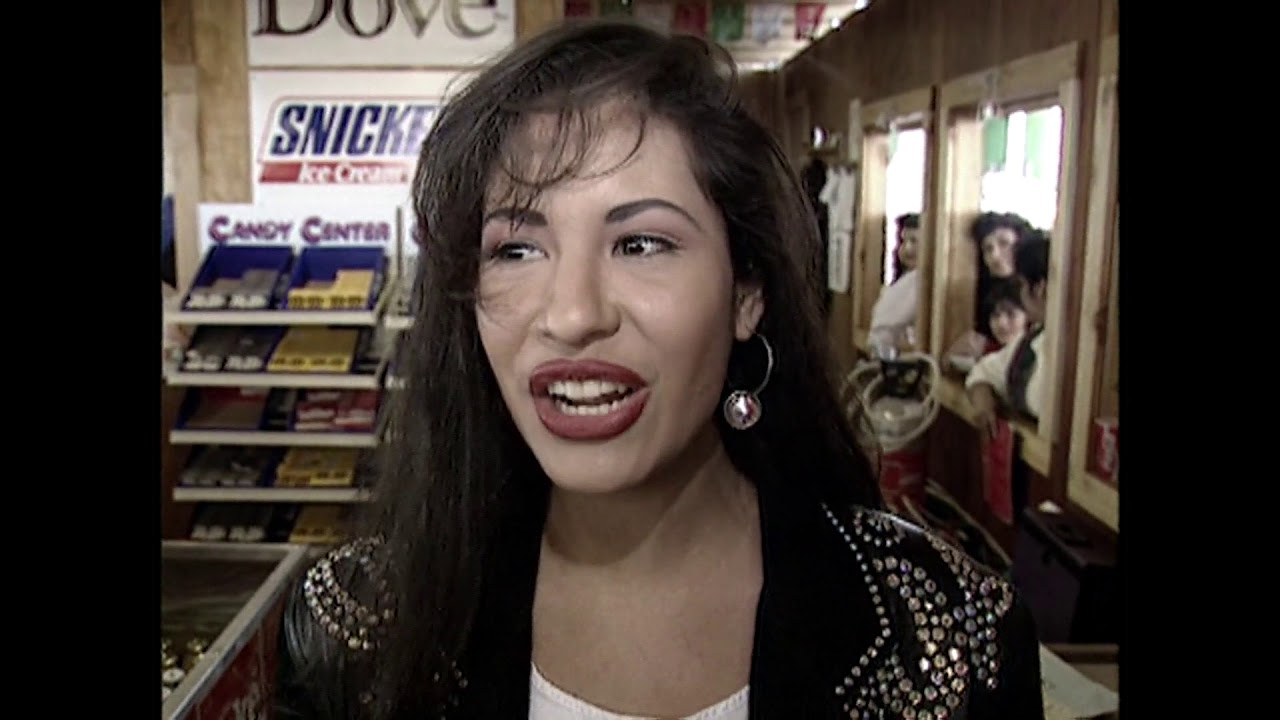 It was supposed to be the start of a bright new chapter. Tejano star Selena Quintanilla-Pérez was working on her English crossover album, Dreaming of You, following the success of her four Spanish-language albums throughout Mexico and Latin America. But before she could finish her record, Selena was shot and killed by former fan club president Yolanda Saldívar on March 31, 1995. She was 23 years old.

Selena may physically be gone, but the essence of who she was still permeates our culture today—26 years after her death. It’s not just her songs, but her sense of fashion and style, too. Since Selena’s death, there have been everything from Selena-inspired clothing and makeup lines, to tribute albums, concerts, musicals, memorials, Barbie dolls, wax figures, drag shows and various other art forms celebrating her life, including a series from Netflix. Christian Serratos is spot-on as Selena.

“When Selena passed away, I told my family that I was going to try to keep her memory alive through her music,” Selena’s father, Abraham Quintanilla, Jr., told People in 2020. “And 25 years later I think we, as a family, accomplished that.”

Here, we take a look back at the days leading up to Selena’s death—and explore her legacy today.

How did Selena die?

A month before her death, Selena was at the height of her career: On February 26, 1995, she performed with her band Los Dinos for more than 60,000 people at the Houston Astrodome in her iconic purple pantsuit. A few days later she attended the Grammy Awards for a second time, where her fourth-studio album Amor Prohibido was nominated for Best Mexican-American Performance. (She lost, but in 1994, “Selena Live” won the Grammy for Best Mexican-American Album.)

She was also recording “I Could Fall In Love” with noted songwriter and producer Keith Thomas in Franklin, Tennessee. And outside of music, Selena was looking to expand Selena Etc, a boutique brand that she launched the year prior with stores in San Antonio and her hometown of Corpus Christi, Texas.

But in early March 1995, Selena and her family discovered financial problems with her fan club and fashion brand. They accused Saldívar—who was promoted to manage the boutiques after her successful work with the club—of not sending fans items that they paid for, as well as embezzling $30,000, the Associated Press reported at the time. Selena tried to recover those records on a few separate occasions, and on one such attempt at a Days Inn motel in Corpus Christi, Saldívar shot Selena in the back with a 38-caliber revolver. The bullet shattered an artery in her collarbone before exiting her chest, the effects of which also negatively impacted her brain function, according to the Associated Press.

Several motel employees later testified that Selena came running into the motel’s lobby after being shot and chased by Saldívar. She gave Saldívar’s name and room number before she collapsed and was rushed to Corpus Christi Memorial Hospital, where she was pronounced dead, AP reported. This testimony was in conflict with Saldívar’s defense, that she shot Selena by accident. Saldívar was found guilty of first-degree murder and sentenced to life in prison, though over the years she’s maintained her innocence and filed for several appeals to no avail.

The sudden loss of Selena was so devastating that many couldn’t believe the news at first. Maria Aguirre, a receptionist for Tejano radio station KQQK at the time of the singer’s death, told the New York Times that calls from fans poured in as the news of her being shot spread, many of whom were “calling to confirm” that Selena died.

“They cannot believe that it happened,” she had said. “It’s almost like the feeling when John Lennon died. She was the queen of Tejano.”

Selena’s death was marked by a public outpouring of emotion. According to My San Antonio, over 60,000 fans attended her public viewing at the Bayfront Convention Center. Fans also gathered for a mass in Selena’s honor at L.A. Sports Arena, where she was intended to perform that same day.

Selena was buried at the Seaside Memorial Cemetery in Corpus Christi, TX on April 3, 1995. The private funeral was broadcast live, per Texas Monthly. In Chris Perez’s memoir, he wrote that guests were asked to place white roses on her coffin. “By the time Selena was buried, a two-foot pile of roses was piled on top of the coffin,” he wrote.

What happened to Selena’s family?

Selena’s family—Abraham, her mother Marcela, her siblings Abraham III (A.B. for short) and Suzette, as well as her husband Chris Pérez—are alive and well today. While A.B., Chris, and Suzette were part of Los Dinos, only A.B. and Chris went on to keep making music and form new bands (though there have been a couple of Los Dinos reunions over the years, including the 2015 Billboard Music Awards).

Suzette manages the family’s entertainment company and studio, Q Productions, that her father founded in 1993 and where Selena herself recorded music. The studio is also home to the Selena Museum that the family built “in response to the thousands of letters mailed to them by fans expressing their desire to have Selena’s memory shared with the public.” Suzette also worked closely with MAC Cosmetics on their second Selena collection. And The Selena Foundation that Abraham and his wife Marcela run to help children in need has partnered with local groups in Texas to bring together live events honoring Selena, such as the Fiesta de la Flor.

In 2012, Chris released his memoir about his relationship with Selena, titled To Selena, With Love. And last February, Selena’s father shared on his Facebook that he finished co-writing his own book with Nancy De Los Santos, who was a co-producer on the 1997 Selena biopic starring Jennifer Lopez that catapulted both the late singer and the actress into global recognition.

On the 20th anniversary of the Selena movie in 2017, Abraham and Suzette sat down with Entertainment Tonight to reflect on Selena’s legacy. “She had this beautiful personality, and this amazing talent,” Suzette said. “Combining all that together, I think that’s why we’re still talking about her.”

Selena remains not only one of the most beloved, but one of the most successful Mexican-American artists to date. The posthumous release of Dreaming of You in July 1995—her record label combined her four English songs with earlier Spanish-language hits and covers—sold 175,000 copies in its first day alone, a record for female artists at the time. A month later it debuted at number one on the Billboard’s Top 200, and up until 2018, the album spent the second-most weeks at number one on Billboard’s Top Latin Albums chart. (Latin singer-rapper Ozuna broke her record with his debut album, Odisea.)

She broke barriers within male-dominated Tejano music, a style that combines genres such as folk, mariachi, and cumbia, while putting her own spin on it. This allowed her to appeal to both her Mexican and American audiences. While Selena was not the first or last Latinx or Hispanic artist to crossover—Bad Bunny, J Balvin, and Rosalía are some of the artists who have Spanish-language songs on both Latin and U.S. charts today—her accessibility remains a unique example and inspiration.

“I think she still represents the possibility of being a complete American…while still being ‘Mexican enough’ and not losing touch with her family or her roots,” José Limón, professor emeritus at the University of Notre Dame, told NBC News. “This is the sort of contradiction that all Latinos live with, and she embodied it and navigated both worlds successfully.”

New York Times best-selling author Shea Serrano shares a similar sentiment in the Selena chapter of his book Movies (And Other Things). He recalls the scene where Abraham (played by Edward James Olmos) is explaining to his kids how exhausting it is trying to be Mexican enough for Mexicans and American enough for Americans. The movie “represented us. And it did so in a way that rarely happened then, and, even more than two decades later, rarely happens now,” he wrote.

While Latinx representation remains low, not just in movies but across various other industries, the public mourning of Selena’s death and the many tributes, including the movie, marked both a shift in and enabled greater Latinx visibility. Author and scholar Deborah Paredez explores this in her paper, “Remembering Selena, Re-membering Latinidad.” She considers how People (then People Weekly) launched People en Español a year after their issue on Selena’s death sold out and how Selena Forever, The Musical shined a light on Latinx people in theater. The musical ran from 1999-2001 in Texas and Los Angeles, and 95% of the cast members (and most of the attendees) were Latinx, which demonstrated that a lack of representation was not for lack of talent, Paradez wrote.

Ultimately, she wrote, Selena’s memory became a safe place for Latinx people to assert their identity and demand their voices be heard. Today, her legacy lives on with a younger generation, with creators celebrating her on TikTok.

The Netflix show is one of many projects to commemorate Selena.

In late 2020, Netflix released the first six episodes of a two-part miniseries about Selena’s career, with the second half arriving in May 2021. An ensemble piece, Selena: The Series focuses especially on Selena’s time in her family band, Selena y Los Dinos. “We all know Selena the icon, but this show is about her family, and how they all played a pivotal role in her success,” Gabriel Chavarria, who plays A.B., tells Oprah Daily.

Ricardo Chavira, who plays Abraham, agrees. “We’re going deeper into the dynamics of this family. You have fully realized characters in all the different family members. I think it’s significant now, because of the age in which we’re living in—especially with COVID. A lot of families are spending more time together. It could be instrumental in us recognizing the significance of our own families, and also the family of community,” he says.

Between Netflix’s series, and the planned books and albums from the Quintanilla family, a new generation will soon discover all that Selena was able to do when she was alive—and what she continues to do in death.